Your PNC members Cindy Sloat and Mark Harmata, Co-Chairs; Chris Aher, Session Liaison; Ernie Jung; Kate Henriques; Megan Christian; and Nancy Munn; with support from Ralph Jones, the liaison from the presbytery Committee on Ministry, after many months of hard work, are pleased to present to you our recommended Pastoral candidate, Rev. Adele Crawford.

About Adele
Adele came to ministry on a path that first led through the professional music world. She received both her Bachelor and Master of Music degrees magna cum laude from the University of Michigan before embarking on a fifteen year career in opera which took her across the United States, Europe and the Middle East, including four seasons as a principal artist at The Metropolitan
Opera. She has seen the church and world from many different angles and relates well to people in and outside the church. Early in her music career, she sang professionally in a variety of denominational churches and reformed temples, but she is a life-long Presbyterian.

In 2005 Adele left her singing career to answer a call to ministry that had long been on her heart.  She was a Presidential Scholar at Louisville Presbyterian Theological Seminary before transferring to Yale University, from which she received her Master of Divinity degree in 2008.  She was ordained in the PC(USA) in 2009 and became the fourth generation pastor, and the first woman in her family to be ordained as such.

She has served as an interim Christian Ed Director, a liturgical consultant, and Acting Associate Minister for a large suburban church where she was responsible for youth programs, confirmation, preaching and worship leadership, as well as pastoral care.  Most recently, Adele served as Interim Dean of Chapel at Yale Divinity School, overseeing the daily ecumenical worship life of the seminary community.

Well known in the Presbytery of Southern New England, Adele is serving in her third year as a member of the Worship Task Force for presbytery meetings, and was recently elected chair of the Social Justice Committee.  Together with several former classmates, she is the recipient of a Communities of Theological  Friendship grant from the PC(USA) to help to establish and develop a support network for newly ordained second-career clergy women.

We find Adele to be well-spoken, polished, thoughtful, mature, creative, and energetic. Her sermons are well thought out and captivating.   She stood out among our finalists as one deeply desiring to know us as individuals and as a congregation.  All of these things, including her background, strong faith and calm presence drew us to her as the right choice for Valley. 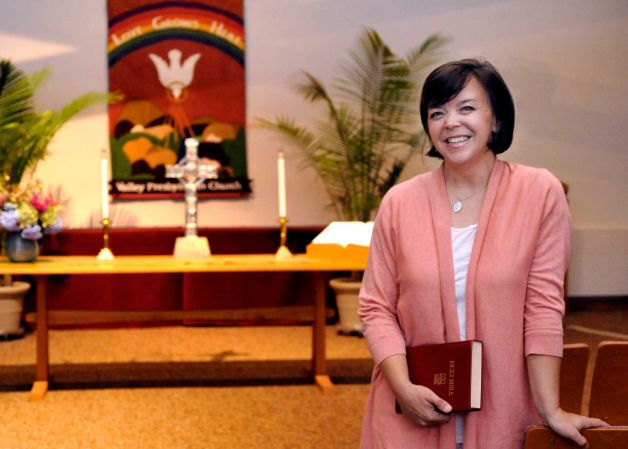